The Center for Innovation in Worker Organizations (CIWO) at Rutgers

The Center for Innovation in Worker Organization (CIWO) is a “think and do tank” whose mission is the promotion of strong workers’ organizations. They seek to shift the balance of power towards greater economic and social equality. CIWO leverages the resources of a highly respected research university to create a centralized go-to institute for strategic and organizational development. Their primary objectives are to facilitate the generation and dissemination of ideas, strategies, and programs for newly emergent as well as established worker centers, community organizations, labor unions and local, state and national networks. 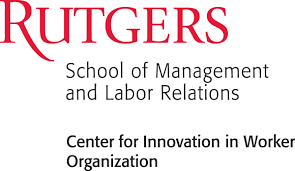 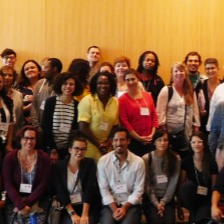 KB is the Outreach Director at the Center for Innovation in Worker Organization at Rutgers University.  After organizing alongside janitors on her college campus, she got her start in the labor movement with SEIU 1199 New England, and then made her way back to college organizing as Domestic Campaigns Director for United Students Against Sweatshops.  After her term ended with USAS, she began work with AFSCME 3299 where she learned what’s possible when unions and community partners team up to run common good campaigns.  She most recently moved back to her hometown of Philly where she organized with the PA nurses union, and where she has worked with the AFGE to create an organizing program with locals around the country. Following a call to deepen her spiritual relationship to social justice, KB recently completed her first year at Union Theological Seminary, and is pursuing ordination.

MaryGrace is the Senior Program Administrator for the Center for Innovation in Worker Organization at Rutgers University. She has been organizing in a variety of labor sectors (campus dining hall workers, food service workers, fast food workers, and app based/black car drivers) since 2012 and is passionate about relational organizing, leadership development, and coalition building. MaryGrace began working for the WILL Empower program in 2019. There, she became deeply involved in the CIWO ecosystem and was inspired by the capacity that can be built by creating intentional and authentic networks throughout the economic justice movement. MaryGrace recently completed her Masters Degree in Social Work at Rutgers University and is based in Hudson County, NJ.